This week, we comprehend controversial current events with Never Rarely Sometimes Always, and balance it out with my Weekend Classic Pick: The Sisterhood of the Traveling Pants. But more than confronting hot-button political topics, these films both depict the sometimes euphoric, sometimes terrifying reality of what it means to be a young woman finding your place in the world. Whether we’re talking abortion rights, or what it means to let go of your childhood best friends, the nuanced experience of coming into womanhood is never simple, and always powerful. 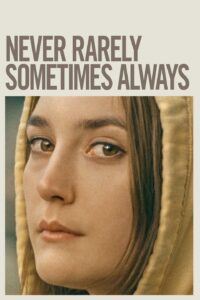 As a man, it’s incomprehensible what a woman must go through when determining to have an abortion. Yes, we “understand” and “believe in pro-choice,” but we truly have no real idea of the physiological, emotional and physical toll that it takes.

Writer/ Director Eliza Hittman has delivered a masterpiece depiction of the experience of young abortion, one that cinema has never quite seen before. Never Rarely Sometimes Always is the RIGHT FUCKING NOW film that world has been waiting for. It’s an intensely poignant piece of cinema, I will not soon forget.

Never Rarely Sometimes Always tells the story of Autumn (Sidney Flanigan) as she and her supportive cousin (Talia Ryder) embark on a tense journey through NYC after finding out about an unplanned pregnancy bestowed on our credulous protagonist. Not since Juno has a film about teenage pregnancy felt so honest and forward.

There’s nothing Hollywood about this hard hitting arc. It’s a cold, upfront look at the everyday truths young women face when going through with an abortion and having to take measures into their own hands. There’s not always an adult to advise you. We talk about young girls having abortions often, but rarely about the young women whose parents are absent for whatever reason, leaving them to walk through a journey of this magnitude alone.

Eliza Hittman demonstrates her power as a storyteller with a powerful message about choice and the resilience of spirit. The dialogue is authentic and baring. From the day-to-day conversations a teenage girl has with her family and coworkers, to the 30-minute verbal questionnaire the case worker gives her to make sure she’s making the right choice. It’s frank, muted and ultimately devastating.

Sidney Flanigan establishes herself as quiet force to be reckoned in her feature film debut. She moves with a fiery, focused fortitude that leans deep into her seemingly never-ending path to freeing herself from a future reality that plagues her mind. Like an onion, Autumn is layered with hidden truths and a childhood that had torn her soul to pieces. She is hiding in her skin and moving through life with a clinked fist full of anxieties and emptiness. Everyone assumes her unwillingness to want to be pregnant is just the folly of youth and irresponsibility.

The agony of seeking finality is palpable as our two young women aimlessly troupe around NYC for three days, hoping that the vibrant nature of the city keeps their minds occupied and hopes high. Autumn is a blank canvas for the audience to pour themselves into and fill her vacantness with personal and deep emotions. The message is clear and the voyage is unapologetic in how it portrays a cornucopia of pain and glory.

Autumn is a teenage girl who doesn’t want to be a mother, and she is sure of it and will do anything to protect herself from a narrative that isn’t her own. It’s refreshing and inspiring, even in its dark moments. It’s an open and closed exposé on definitive decisions with zero gray areas; An avenue modern cinema rarely takes but sorely needs.

Weekend Classic Pick: The Sisterhood of the Traveling Pants 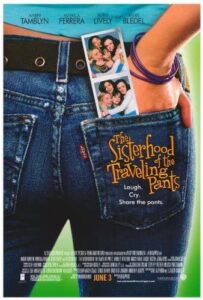 Sometimes, movie goers simply want something easy to digest. For me, a good mid-2000’s teen romp is all I need for a cozy, couch potato viewing session. Nothing makes me feel warm and comfy quite like The Sisterhood of the Traveling Pants. It’s like totally deep and frickin’ fun as shit! (Insert Alexis Bledel voice).

It’s an easy setup to follow: four childhood friends about to embark on a special summer apart for the first time in 16 years, decide to send back and forth a pair of thrift shop jeans that magically (read: suspiciously) fit each of the girls’ varying body types.

I know, I know, how could I recommend this as a viable classic? Well, like any good bait and switch, this film disguises itself as a PG, pink tinted, white girl circle jerk, but ultimately revels itself as a strong character study that drives home significant themes of sex, race, loss and pure unapologetic women power.

Reserved Lena (Alexis Bledel) flies to Greece and experiences her first brush with love and self-expression. Sporty, All American Bridget (Blake Lively) goes to México for soccer camp and learns from her older camp counselor what a one-eyed monster is and how to deal with her mother’s shocking suicide. Emo Tibby (Amber Tamblyn), stuck home, engages in a film project that leads her down a road of loss and defining herself. And then of course we have Carmen (America Ferrera)—our sole person of color—who has to spend the summer in South Carolina with her absent father and his soon-to-be Stepford family that more than disapprove of her culture and upbringing.

Four relatively formulaic storylines are surprisingly elevated and poignantly told with a strong screenplay that plays beautifully off the equally satisfying novel. Men suffering from acute cases of toxic masculinity may find themselves steering clear of this Limited Too-soaked flick—but for us feminists (male, female, straight, gay, whatever) in the mood for something syrupy and positivity-driven, this fun coming-of-age classic is an instant re-watch, filled with all the feels and a longing for a neon-splashed pajama party.

Related Articles
The Cinema Agenda: The Cult of Horror
By O’Neal Montgomery II
Cults, Witches and Scissors, OH MY! This week we jump into the world of horror with the newly released, The Lodge and The Wretched—and take a dive into my Weekend Classic Pic: Inside (2007).…
The Cinema Agenda: Redemption in Comedy
By O’Neal Montgomery II
This week we ride into the world of comedy with Netflix’s simultaneously released: The Lovebirds and The Wrong Missy. The network has had its huge hits (Always Be My Maybe) and misses (just keep…